How To Deal With Frozen Pipes And Ice Dams

We have dealt with difficult ice dams and the flooding they can cause. When dealing an event like this it is important to work with the professionals who know how to deal with the situation. Able has worked on many projects to restore flooded homes to their best look.

Low temperatures can lead to freezing air and ground temperatures, which can play havoc with pipes still filled with water. Both inside and outside your home, it’s important to either evacuate, insulate, or warm pipes to avoid freezing. And know how to deal with a frozen or burst pipe:

If you do encounter a frozen pipe: do not panic. This is often found when water is stopped in the pipe. Search for either a dripping or ice-covered pipe and listen for a hollow sound. You can use a hair dryer or pick up heat tape from your local hardware store. If the pipe has burst, make sure to shut off the water before starting repairs.

Ice dams are a huge – and costly – headache for any homeowner. They are caused by two things: the heat of your roof, and the freezing temperatures. As snow and ice melt on your roof (which is above freezing due to heat loss from the room below), it runs down to the edge of your roof. At the edge of your roof, which is freezing since there is no room below it, the water re-freezes, forming an ice dam from the water behind it. That water is pushed back and down, which can cause it to push through your roof and into your home, resulting in massive water damage. 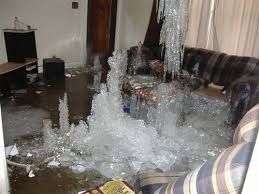